Cycle-Tracks,
the old and the new in Austin, Texas

Anyone who has ridden Austin’s first attempt at a cycle-track, the 20-year-old two way bike lane on Great Northern, can be forgiven for being skeptical about Austin’s cycle-tracks. Built along the Union Pacific railroad side of Great Northern, this two-way bike lane on a two-way street is one of those oops moments. The concept is great. Build a way for cyclists to move out of traffic along this road that is long and straight and doesn’t connect directly to anything. This road should have low traffic volumes and speeds. 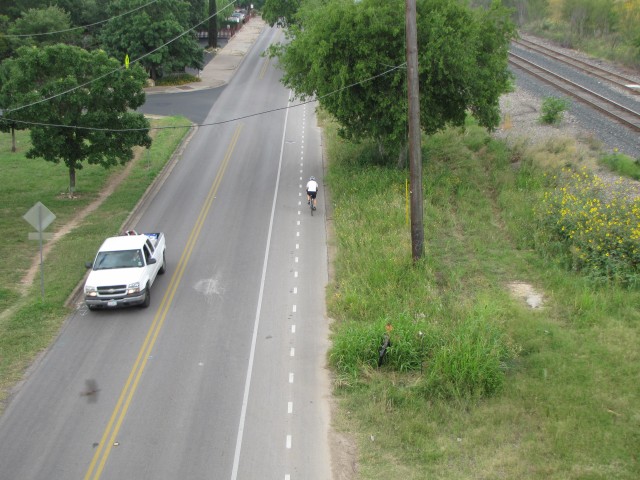 This is a view southbound showing the large separation between opposing flows. Unfortunately southbound motorists face northbound cyclists with only a white line to separate the flows as show in the following video.

Fast forward to April 2012 and the introduction of the latest and greatest in bicycle facilities for Austin, the two-way separated cycle-track on Rio Grande running right through west campus. Now this is the way to design and build a cycle-track. 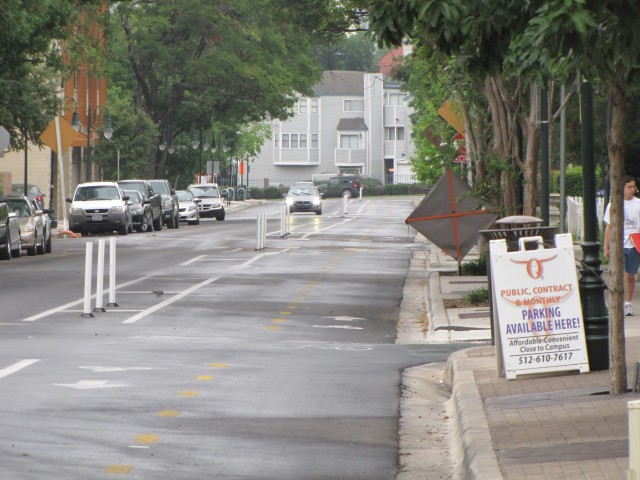 Built on the west side of a one-way north street, this cycle track separates the southbound cyclists from the northbound motorists with a northbound lane of cyclists and a painted buffer.

The ribbon cutting for the new cycle-track on Monday April 23, 2012 was a real party with lots of dignitaries including Council member Chris Riley, the head of City of Austin Public Works Howard Lazarus, Bicycle Program Manager Annick Beaudet and, on hand all the way from Boulder CO to announce that Austin has been named one of only six Green Lane cities, the head of the Green Lanes project of BikesBelong, Project Director Martha Roskowski.

The Green Lane Project is leading the effort to catalyze the installation of world-class bicycling facilities in the U.S. “We are seeing an explosion of interest in making bicycling stress-free on busy city streets, ” said Tim Blumenthal, Bikes Belong president. “The selected cities have ambitious goals and a vision for bicycling supported by their elected officials and communities. They are poised to get projects on the ground quickly and will serve as excellent examples for other interested cities,”

In addition to Austin, the Green Lane cities include Chicago, Memphis, Portland, San Francisco and Washington. 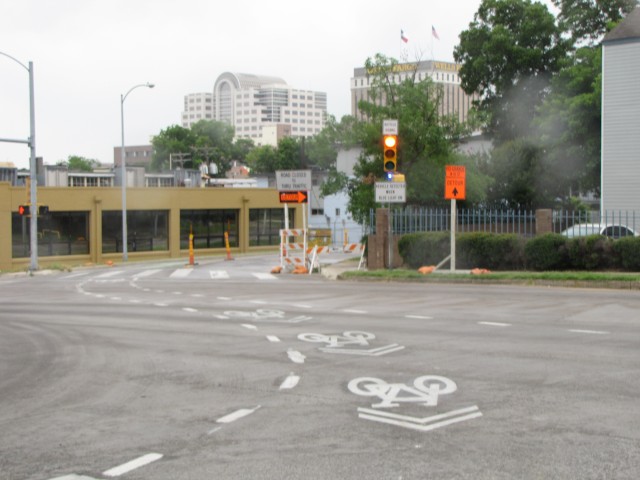 Martha Roskowski called this intersection a “work of art” as it brings cyclists across Martin Luther King into the cycle track where Rio Grande goes from two-way to one-way. The small blue light below the signal indicates that the signal has registered the presence of a cyclist and lets the cyclist know that the signal will be changing soon.

This cycle track is the beginning of making Rio Grande a bicycle friendly street from downtown Austin through the University of Texas campus. While this is the first (or second) cycle track in Austin, the public works department has been doing great things with simple changes.

Next Blog: Road Diets in Austin

Long history in the bicycle safety world. League Cycling Instructor and expert witness in human behavior in traffic.
View all posts by Vintagengine →
This entry was posted in Uncategorized. Bookmark the permalink.