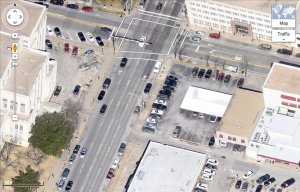 Austin Public Works department has marked Guadelupe and Lavaca (paired one-way streets) with paired sharrows in the outside lanes as can be seen in this view of Guadelupe in front of the Travis County Courthouse.

It is wonderful to live in a city where the elected officials, the public works administration and the community works together to create change that benefits all road users.

In Austin, TX one of the changes that has made life a little easier for cyclists traveling north/south in the downtown area is the addition of paired shared lane markings (sharrows). Note in the picture, just below the intersection, both of the outside lanes are marked with sharrows. These streets are major north/south arterials with four lanes of traffic and parking on both sides.

Texas law (most states) states that on a one-way street, cyclists may ride as close to the left edge or curb as is practicable as well as as close to the right edge or curb as is practicable. The cross streets on this pair of one way streets generally alternate between one-way to the left and one-way to the right. If you are going to turn left it makes sense to use the left lane. The sharrows in the left lane help cyclists remember to control the lane and give motorists and indication that cyclists will be there.

Many thanks to our bicycle staff in the City of Austin Public Works department!

Long history in the bicycle safety world. League Cycling Instructor and expert witness in human behavior in traffic.
View all posts by Vintagengine →
This entry was posted in Austin, Facilities. Bookmark the permalink.